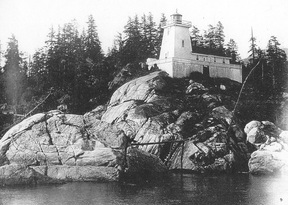 In 1792 Captain George Vancouver, R.N. began surveying the southern B.C. coast, and named the entrance into the sound "Point Atkinson", after a particular friend, Mr. Thomas Atkinson, master R.N., a follower for years of Lord Nelson and subsequently master of the “Victory” at the Battle of Trafalgar.   The traditional territory of a number of First Nations people:  Tseleil-Waututh (Burrard), Squamish, Musqueam & Sto:lo, their name for the point is Sk’iwitsut = turning point, for waters known to have hazardous currents.

After a brief flurry of surveying by Britain and Spain, there was little activity in Burrard Inlet for more than 50 years.  The land and maritime fur trade was dominated by Hudson’s Bay Company at Fort Langley & Fort Victoria.  Gold was discovered in the late 1850’s, and a decade or so later, logging and saw-milling began on the shores of Burrard Inlet.  Vancouver was becoming a prominent commercial centre on the Pacific coast of North America.  Ships arrived from Asia, Russia and Europe.  The protection of international trade pushed the Federal Ministry of Marine to build the lighthouse at the entrance to the Port of Vancouver.

Pt. Atkinson was one of the first three public works to be built by the Dominion in return for B.C. agreeing to join Canada in 1871.  There were two lighthouses and a lightship at the mouth of the Fraser River – Race Rocks & Fisgard, both built in 1860.

Pt. Atkinson’s first tower, a brick and wood frame construction with attached dwelling, took two years to build and cost $4250 in 1874.  It measured 49 feet from its base to the vane of the lantern.  The square tower served both as a lighthouse and dwelling for a light keeper and an assistant, including one sleeping apartment and a passageway to the lantern.  The original light shone from a wood tower 95’ above the sea, visible 14 miles away on a clear night. 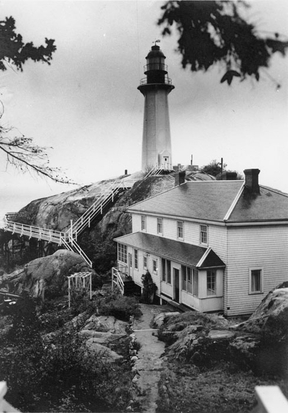 In 1910, the station was transformed.  The original frame tower was torn down and replaced by 1912.  Col. Wm. P. Anderson, Chairman of the Lighthouse Board designed a hexagonal reinforced concrete tower embraced by six buttresses, an innovative design which gives greater stiffness to the tower, yet allows it to vibrate and sway in high winds while keeping the lantern as steady as possible.  Standing 18.3 m (108') above sea level, it is a functional monument which in 1912 won accolades worldwide.  The tower became a prototype which has since been used throughout Canada.

A fourteen room duplex was built to house the keeper and his family beside an assistant keeper and his family.
HURRAH!  A work crew arrived on the light station on Thursday, September 16 to prepare for the restoration and painting of Point Atkinson’s Lighthouse.  Their first two days on the station were spent power-washing the red cupola, the lantern room and white concrete tower.  To protect the lighthouse against the elements and improve its visibility as a navigational aid, a fresh new coat of regulation red and white paint was then applied.  The painting was completed on September 25.

The West Vancouver Historical Society is grateful to Heritage BC and the Legacy Fund for their $8000 Legacy Fund Grant in support of this project.  The society appreciates the support from the District of West Vancouver and the Department of Fisheries and Oceans in recognition of the historic value of the Point Atkinson Lighthouse and extends a hearty thank you to the community groups and individuals who wrote letters of support to Heritage BC.  ​