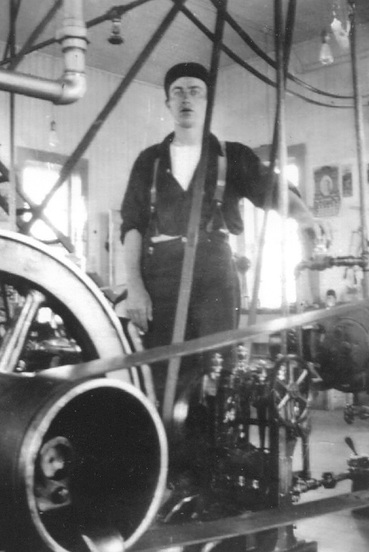 Larry Grafton took over for one year at Point Atkinson after his father Thomas died in 1933.

The light:  It was vaporized coal oil under pressure, 30 pounds pressure.  There was a vapour tube that was heated to make the vapour and a mantle about 2.1/2-3” high, an asbestos mantle.  The mantle looked just like an Aladdin lamp mantle.  In later years, they gave us a shorter mantle which was more on the Coleman, a squattier one.  The light was intensified by prisms.  There were two bulls-eyes on each side of the unit.  It floated in a mercury bath run by clockwork.  The prisms were located in the unit in such a way that they gathered the light to the bulls-eye where you got the intensity.  The flashes were caused by the light beam coming through the bulls-eyes.  The mantle was exactly behind the bulls-eye.

The foghorn:  It was operated by compressed air and a diaphragm.  There were gasoline motors, six horsepower Fairbanks motors, great big one cylinder motors and they drove the compressors, air compressors.  There was a big tank from the floor to the ceiling in the fog-horn building.  The compressor was going all the time and there was a wheel on the timing apparatus for the blast, see it was a three-second blast every 10 seconds.  So twenty-seven seconds between blasts and when this wheel revolved, the engines drove the wheel and it was on a screw and every time this projection came around, it pushed the valve down and allowed the air to escape until it rolled over.  This wheel was coming around each thirty seconds and pushing that valve down and releasing the air into the diaphragm.

Work:  It was just work, work, work and don’t be lazy.  You had to constantly be on the alert for something unusual......and the whole place had to be painted each year.  And everything had to be kept shipshape.   We had to wind up the weights every 2.1/2 hours during the night.  Somebody was on duty 24 hours a day.

Marine Rescues:  There were quite a few accidents during the Graftons’ time.  “I remember the old Marine Express coming out with a load of furniture and getting into trouble.  They dumped all the furniture overboard out in the tide-rip outside the lighthouse.”   “My young brother and I picked six people out of the water one Saturday morning.  They came down Howe Sound in a little sailboat and capsized in the rip.  We managed to go out in a 12 foot boat.  Eight of us in a twelve foot boat out in the rip.  Dad finally came out and picked us up.”

“I remember one night, there was a fishboat came ashore and smashed up right close by the lighthouse and we got three men out.  They were the only ones aboard.  Dad gave them his clothes and they left and we never saw them again.”