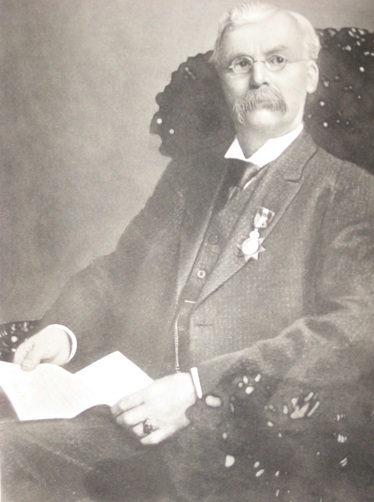 Walter Erwin arrived from Port Moody in 1880, to take over from Wellwood.  He had been recommended by an MP from New Westminster.  Mr. Erwin pre-empted land in the Cypress Park area, where he later grew fruit trees, and soon became friends with the pilots and people who lived there.  When his wife became very ill three years later, requiring medical attention on a stormy night, a nurse named Susan Patterson was brought out to the station from Moodyville by two Indians in a canoe and she administered to Mrs. Erwin.  Poet, Nora Duncan, celebrated this event in her poem, “The Heroin of Moodyville”.

Erwin remained a steadfast keeper until his retirement in 1910.  Shortly thereafter,
Mayor Taylor awarded Erwin the King George V Imperial Service Medal, which had a silver star embossed and mounted with a replica of the crown, attached to the British colours and inscribed, “for faithful service”.
excerpt from the Mayor’s speech – “The Hon. Mr. Templeton, Minister of the Department of Marine & Fisheries for the Dominion Government has requested me to present to you this Imperial Service Medal awarded in recognition of your long and faithful service as lighthouse keeper at Point Atkinson, and I can assure you that I feel proud of the fact that I have been entrusted with the duty of representing the Dominion government on this occasion.”

In 1881, 185 acres of land was set aside by the Dominion of Canada to act as a dark backdrop to the lighthouse.
Lighthouse Park has since become the only remnant of Old-growth Douglas-fir in the lower mainland.