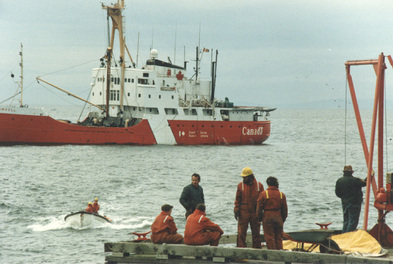 The last keepers to work at Point Atkinson, Gerald Watson, senior keeper, and Donald Graham, junior keeper, arrived at Point Atkinson at the same time, in September, 1980, each with their wives and each with two young sons. They alternated a 12 hour shift, noon to midnight, or midnight to noon, seven days a week, changing every two weeks.  By VHF radio and using specific weather recording equipment, the keepers reported the current sea, sky, wind and visibility conditions, every three hours, recorded in a daily log book.  These records went to Atmospheric Services with Environment Canada on a daily basis.

Both families had school age children, a factor in their desire to move to an “in station” closer to a community.  Instead of correspondence schooling, the boys could now walk through the park along Beacon Trail to a bus stop on Marine Drive.  School buses took them to Caulfeild School, and later Hillside or West Vancouver Secondary Schools.

The Watson family came from Chrome Island light, across from Bowser on Vancouver Island.  An avid hockey fan, Gerry soon enrolled his sons in the sport, which they enthusiastically pursued throughout their teens.

Mr. Watson retired to Vancouver Island in 1996 when the station was "automated"