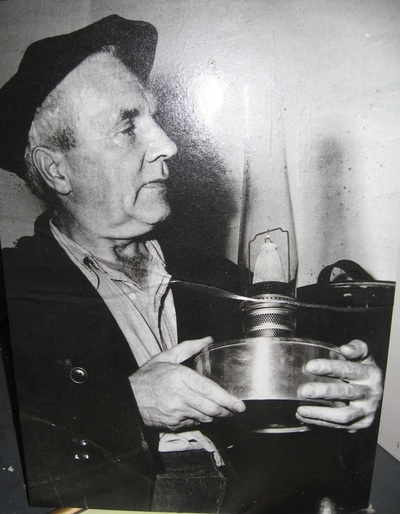 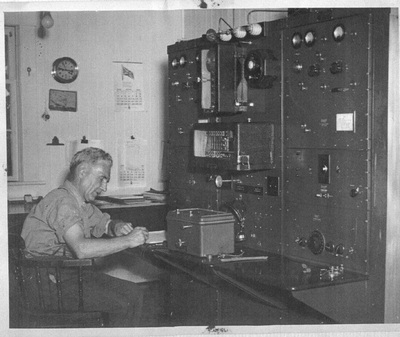 After several years of dedicated service at Ballenas Island light, Ernest Dawe was happy to accept a posting to Point Atkinson with his wife and two school aged children.  He arrived on June 1st, 1935.  His children would now be able to attend school instead of taking correspondence courses mailed by the Provincial Dept. of Education in Victoria.

Within three months of his arrival, Dawe was operating the latest technology, thanks to wireless invention, which led to the introduction of powerful radio transmitters to B.C. lighthouses in the 1930’s.  Point Atkinson’s radio sequence was synchronized with its fog horns, so that ships’ radio operators could home in on the signal and change course in heavy fog.

Dawe’s service saw many changes.  In the late 1930’s, preparations for the Second World War were taking place in Canada.  The Home Guard World War I veterans were assigned to guard the Point prior to the building of army barracks in the forest behind the station.  These men were billeted to the unused portion of the light station duplex, which meant catering fell to Mrs. Gladys Dawe.  This lasted for over a year, during which time there was no water piped into the station.  Norm Dawe remembers “a bunch of older guys can be pretty demanding........bear in mind where your food has to come from.  Oh there’s compensation, you know what the Canadian government is too.  We will have the compensation speak for itself.  They were demanding and they just tore (her) right down to nothing and she died.  Forty two years old.  Then they moved and the navy came in.”

By the time the army built a road through the park, the station was far less isolated.  Marine Drive had been extended to beyond Caulfeild by 1926 and water was piped into the station in 1941.  Annual inspections showed that Dawe kept an immaculate station.  His second wife, Clara, kept a beautiful garden.  Norm Dawe went to Pauline Johnson School and his sister, Marjory, attended Inglewood Junior High.  Norm Dawe remembers, “In good weather you would row the boat to Caulfeild then walk up to the bus stop.  If you had a good southeast wind, you couldn’t get the boat off, let alone row it.  So then you would have to walk and the trail at that time was ........very rugged and from above Snug Cove........it was quite a walk and you really didn’t use that unless there was no other way.”