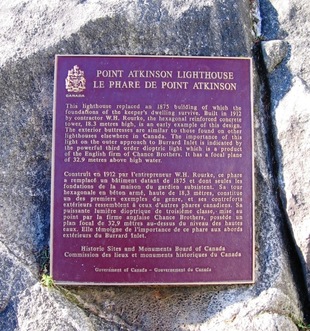 In 1994 Pt. Atkinson was designated a "National Historic Site".  Two years later the light station was automated.  It is still a functioning aid to navigation, serviced by Fisheries & Oceans Canada.  Pt. Atkinson was added the West Vancouver's Heritage Register in 2008.
In 1997 the District of West Vancouver took over the management of the station's two residences and the surrounding grounds.  The lighthouse and all ancillary buildings remain under the jurisdiction of the Fisheries & Oceans Canada.

On May 7th, 2008, the Heritage Lighthouse bill was passed by Parliament.  Bill S-215, sponsored by former BC Senator Pat Carney, cleared both the House of Commons and the Senate.  The legislation establishes a process for communities to initiate the selection of heritage lighthouses under criteria established by the Minister of the Environment who is responsible for Parks Canada.  It also prevents the unauthorized alteration or disposition without community input and requires that all heritage lighthouses be reasonably maintained.  It applies to numerous federally-owned lighthouses, most fully operational guardians of maritime safety.

In 2014 the District of West Vancouver applied for protection of Pt. Atkinson under the Heritage Lighthouse Protection Act, with letter of intent to enter into good faith negotiations with the Fisheries & Oceans Canada, who had until May, 2015, to provide a business plan for Parks Canada to process Pt. Atkinson for Heritage status.  Parks Canada has reported to the Minister of the Environment as to what has happened over the lifespan of the Act.   Pt. Atkinson's petition is alive and still undergoing processing.  Under the Act whoever takes ownership must maintain it in a reasonable state.  If there is any change in the status, it has to involve the public process.

For details about specific sites under the 2010 Heritage Lighthouse Protection Act go to http://dfo-mpo.gc.ca.