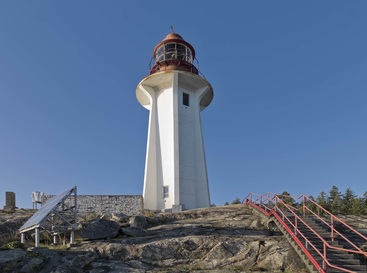 Since 1998 the Point Atkinson Lightstation Society (PALS), a sub-committee of the West Vancouver Historical Society, has taken the lead in advocating for the preservation of Point Atkinson as a fully functioning heritage site. The committee's goals are to preserve the buildings, historic access and inner workings, and to document the history of Point Atkinson, to ensure future generations of Canadians have access to and learn more about the Lighthouse and its importance.

The Society has been involved in securing repair for the buildings in most serious need, and it continues to seek consensus with government jurisdictions responsible for Point Atkinson's future.

In honour of Canada's 150th anniversary of Confederation, the Lighthouse Park Preservation Society and the West Vancouver Historical Society hosted free guided tours of the Point Atkinson Light Station from May through September, 2017.  This initiative was made possible by the Community Fund for Canada’s 150th, a collaboration between the West Vancouver Community Foundation, the Government of Canada, and extraordinary leaders from coast to coast to coast.  A generous grant of $6000 supported these tours and an Open House of the Point Atkinson's grounds on September 17, 2017.